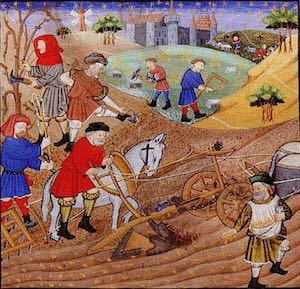 I’m turning the soil in the raised beds ready for planting veg. Even though I protect them with a thick layer of leaves against winter rain, by spring the soil is compacted and heavy and frankly uninviting if you’re a seed.  I spend some considerable time with a narrow trowel forking the soil, breaking up lumps, removing larger stones and hunting dreaded wire worms.

I’ve a sudden image of all those ‘medieval’ films from the 1960s, ’70s and ’80s in which peasants can be seen digging. I’m not sure what they are digging and I don’t think they do too, but digging dirt is what they are doing – even though there’s no sign that the soil shows any evidence of being husbanded before.

Come to think of it, have you ever noticed how – in films – castles and villages stand as if plonked on the landscape, devoid of any sign of agriculture, industry, or anything else which indicates human occupation over a long period of time? Occasionally, chickens scutter past the lens, a pig, perhaps even a dog, but little else.

The landscape lacks purpose and the people associated with it are portrayed in the same way – aimless. And, like the earth they dig, they are always dressed in brown. The villages they live in are brown – sometimes grey (the medieval period comes down to us with a blue filter, whereas the 1970s nearly always has a yellowish tinge.) Where are the clashing colours so beloved by our ancestors and seen in clothing, church and castle? Their world, like ours, was richly hued, even if often mired in mud.