Growing for Gold: the Enduring Appeal of Saffron

It’s one of those things people seem to know about the past  (like Henry VIII had six wives and that spices were used to disguise rotten meat – more on that later): saffron, they say, was worth its weight in gold. It was so valuable that they even renamed a village – Saffron Walden – after it. However, two of those three statements are incorrect. In growing for gold, what is the enduring appeal of saffron from antiquity to the modern era? But first a recap on the fate of my own modest project.

Having enriched the soil first, I replanted the saffron in the original position. I’ve selected the fattest corms for this bed and will nurture the smaller ones into productivity elsewhere. It’s not a crop for the impatient: I might get a few flowers later this year, but the corms will not produce their best for at least another year after that. 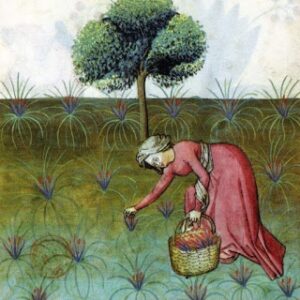 Trial and error, dearth and glut is precisely what our Medieval forebears would have encountered as they attempted to establish new crops on a commercial scale. Too little rain, too much, low temperatures, mice – all affected productivity as much as they do now. With the initial outlay on corms and limited harvests in the first year, saffron was a risky business. Labour-intensive husbandry – both to keep the fields weed free and in the delicate, time-critical harvesting of the fragile stigma – raised costs even further. But the potential rewards were great.

Recorded in antiquity in Egypt, Mesopotamia and Crete, as well as in Persia and Alexander’s Greece, saffron had a global appeal. It was used variably as a dye for cloth, a pigment in art works, and for a wide range of medical conditions including a cure for headaches and heart problems and a salve for wounds. It was thought to have mood-altering qualities and indeed can produce a sense of euphoria due to its compounds (safranal and crocin might have an anti-depressant effect by maintaining the balance of dopamine, norepinephrine, and serotonin (Hosseinzadeh et al., 2004)). Studies in humans show there can be a benefit to patients with anxiety and depression, so perhaps it is then not surprising that it was also an ingredient in some forms of incense and used in both civic and religious ceremony.

In cuisine, we think of saffron as a flavouring and colourant in dishes requiring an exotic tou 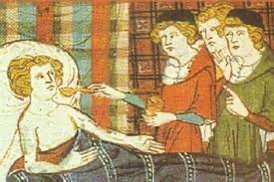 ch. English cookery books from the late fourteenth and early fifteenth-century show an extensive use of saffron despite its exorbitant cost, appearing in almost a half of the recipes in the compilation from Harleian MSS. 279 & 4016, Two Fifteenth-Century Cookery-Books (Thomas Austin) (1430 – 1450) and over a third in Forme of Cury (c1390). Demand remained high with production in England peaking in the Sixteenth-century, before a slow decline and the eventual cessation of production in England altogether.

It takes upwards of 150 flowers (roughly 450 stigma) to produce one gram of saffron. I won’t be growing enough saffron to sell, but the few delicate strands added flavour to the Medieval dishes I’ve tried (see below).

Saffron is now grown in other regions, including in Iran and Afghanistan, Greece and France and remains as valuable today as it was in the later Medieval and Early Modern periods. Its high value perhaps accounting more for its  intoxicating appeal than its slightly bitter flavour and hay-like aroma, saffron nonetheless offers a link to the past and a tantalising glimpse of its potential for the future.

And the odd ones out of the three statements I mentioned at the beginning of this blog?

This is basically rice pudding. I tried it because it uses almond milk and is therefore suitable for those with a dairy or lactose intolerance. I added saffron, which turned the  pudding a glorious golden yellow and imparted a subtle flavour.

Take a portion of rice, and pick it clean, and boil it well, and let it cool; then take good milk of almonds and thereto, and boil and stir it well; and do thereto sugar and honey, and serve forth.