Bank Holiday Monday and it’s brewing a storm. Visitors to this dramatic part of South-West England will be hunkering down on the beaches with BBQs and brollies. Others will escape into Bridport or Weymouth to explore the myriad shops and alleyways, restaurants and antiquities hidden there. Some will brave Portland Bill for a bit of wave-watching. This is where the Portland Race – a stretch of rough and treacherous water – helped the English fleet defeat the Spanish Armada in 1588. Despite the range of lighthouses on the rocky promontory the seas here are no less dangerous for the unwary. Tucked into the lee of the striking red and white striped Portland lighthouse, however, those who relish the thrill can watch the roiling seas in relative safety. Wind-lashed and chilled, it’s all but a quick dash across exposed grass to the warmth and comfort of the nearby cafe.

I’m not going anywhere today. I’m back in the C15th brewing a storm for my protagonist and her family. Consciously or not, I will write the storm into my story, a character in its own right.

All my life I have been fascinated by the changing moods of the weather.  It surrounds us, affecting everything from the clothes we wear to the language we speak. So, do you find the same? Does sea-mist or thunder, thick frost or deep snow inspire you? Make you want to write, paint, sing? Because I know that I could no more neglect the weather in my writing as I can the call of spring in my garden. Today, as the wind thrashes the trees outside, I’ll listen from the tranquility of my room. I’ll watch over the edge of my laptop as the tempest rages hoping, for everyone’s sake, that this one doesn’t make it into the history books. BBQ weather this isn’t.

Rear Window: A Room With A View 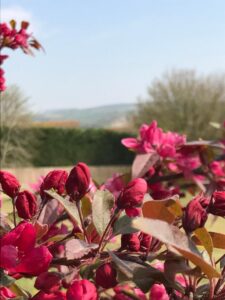 From the rear window I can see the world outside changing. I’ve been laid up for the last five weeks with a plate holding my fibula together and my broken ankle pinned. It’s the last time I’ll be litter-picking on the coastal footpath for a while. Since that interesting episode in early March, winter has drifted into spring. In a normal year I would flow with it, planting and sowing according to the week and the weather, but my recent accident has taken me down another road. 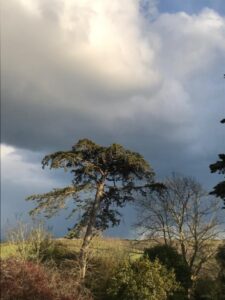 So, here I am, watching the tips of branches swell into tiny leaves of vivid green and glowing burgundy. Early prunus blossom has given way to blackthorn egg-white froth, and soon the ballerina-pink, double-flowered ornamental cherries will steal the show. Beyond the garden, I can see the Dorset hills greening under the persistent sun where, not long ago, brown-ribbed earth sported dots of white seagulls. 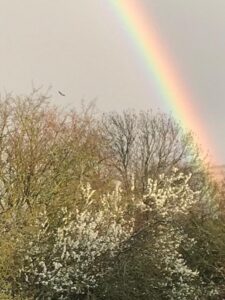 Snow, rain or milk-mist, the ever-changing landscape is a reminder of life’s fragile persistence. For me, writing without reference to the natural world would be to ignore the foundation of our existence. Whether now or a thousand years ago, the patterns of the seasons are tracked by our senses. Without conscious thought, tendrils of nature wind their way onto the page to anchor fiction in reality. Where would I rather be if being there meant not pausing to look, absorb, breathe? Here I am, trapped by circumstance, but free to see.

Illuminated by the roving sun or silhouetted by the moon, the scene encapsulated by my window never ceases to capture my imagination and my heart.

Stripping the Past: Restoration Games

Since my last post on restoring our Arts and Crafts house, things have moved on apace. I finished removing all the modern polyurethane from the wide window seat in my study and then started eyeing up the rest of the room. There’s an inglenook fireplace from the original 1630’s house in my study. Edward Sturdy surrounded it in an oak mantle and this, too, had been given ‘the treatment’ sometime in the 1990’s. Now a dark, icky mahogany brown, the beautiful grain of the wood was lost and the surface dull. As you know, I am wary of removing any finish that might be original but, spurred on by the stripping of the window seat, I set out to do a similar job on the mantle.

The copper bell push had to be removed for cleaning. A lovely thing, it had been lacquered sometime in the last twenty years and needed the old coating removed before polishing,, finding a replacement button, and being put back. Behind the bell the original surface glowed a medium oak, a perfect witness to our hunch that almost the entire house had been subject to a mahogany stain on the extensive areas of woodwork.

Anyway, as before I used a chemical paint stripper (Paint Panther) that softened the varnish enough to be removed without damaging the wood. It took a few coats, scraping (carefully), wire wool, and wire brushes to take off a lot of mucky gunge. I then rubbed the exposed wood with white spirit, used a fine tool to clean the really-hard-to-get niggly bits, and brushed on liquid beeswax and natural turpentine (Liberon) to nourish the surface. Left to dry for upwards of twenty-four hours, this was then buffed to a subtle sheen.

Removing the inappropriate wood stain revealed the probable reason for it: surfaces chewed by time and woodworm. I can understand people wanting to unify the look of the wood; some would say that the use of Douglas fir and oak (and walnut, in some places) was a bit eccentric of Edward Toronto Sturdy, but then that is part of the charm of his house – it’s quirky.

The next project to tackle will be the tiled fireplace. At some point, the 9×9 inch red quarry tiles were painted a heavy, pillar box red. I have no idea whether I can rid them of the noxious coating, but I’m willing to give it a go.

While it is so hot we keep Thegn inside most of the day. He has his early morning walk at about 7am, and at about 7pm he has his second walk, and possibly a third at about 11pm. Yesterday evening, Child Two and I took him to the beach only to find the entire strandline littered with dead and dying whitebait. Mackerel risked all to snap at them on the incoming tide, getting within feet of the shore and flashing in the last light of day. Thegn took full advantage and scoffed three or four of the little fish before we could stop him; he was most grumpy about that. #WeAreThegn #LoveDorset