Switching Off The Heating: A Few Home Truths 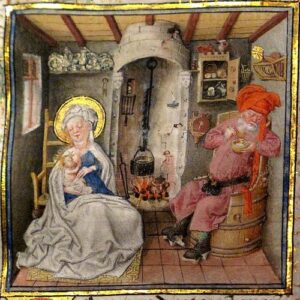 It is freezing but we switched off the heating a month ago and have been relying on passive solar gain (i.e. sunshine through the windows) and log fires/burners to heat the house. I’ll let you into a secret: when we were growing up the copper  warming pans and stone water bottles were not kept for decorative purposes.

As an aside to saving fuel costs, I’ve been monitoring the effects on the ambient temperature on us – and the house – and relating it to previous eras when central heating wasn’t a thing.

I grew up in cold regions – first in Lincolnshire, where the damp winds blow straight from the east and into your bones, then in Norway, where I don’t ever remember being cold despite the enduring snow and ice. 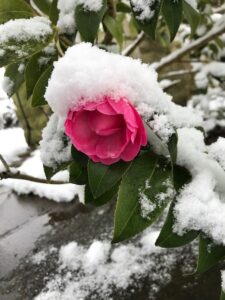 The difference between the two was marked. In Lincolnshire, the walls were brick-built, the roof space uninsulated and the metal-framed windows  (single-glazed) leaked like crazy. At night, insulation was provided by heavy curtains. We had a coke boiler in the kitchen and a small fireplace in the drawing room. We ran around in wooly socks and balaclavas, shorts or skirts, little mittens, and Startrite shoes in which our toes froze. That was it.

In Norway, our wooden house was heavily insulated, the windows secondary glazed, and the solid fuel stove provided ample hot water as well as keeping the house warm. We dressed for the cold and never felt it.

What of now? We live in an old house with C16th origins and state-of-the-art additions built in 1902. The walls are thick, we have insulated the loft copiously, and have secondary-glazed the windows (the metal frames had 1cm gaps when we moved in).

The house gets very cold over a few days if left unheated. Until the 1990s it didn’t have central heating at all. However, every room has a working fireplace and the main rooms have big windows facing south. These windows gather the sun in winter but the angles ensure the rooms remain temperate in summer. On cold sunny days we don’t need additional heating until sunset. On cloudy days it is a different matter altogether and we light the fires and log burners in my study, the hall and the sitting room (I can’t write if my fingers and feet are cold). These keep the chill from those rooms, but the rest of the house remains unpleasantly cool.

So, after a month in which the outside temperature varied from a balmy +18 degrees to -1, we came to the conclusion that: 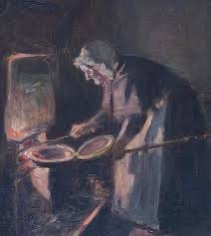 Taking all this into account and relating it to historic periods in a completely non-academic and untested way: 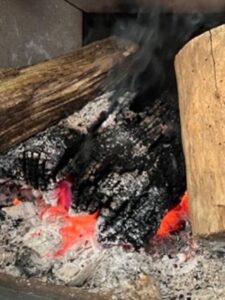 Shivering in this cold snap, we are thankful to have clothes to layer and to have south-facing windows to capture the sun when it shines – and wood, and the fireplaces in which to burn it, when it doesn’t. But I am acutely aware that most people don’t. Whether due to the current fuel crisis or because of an unjust war, too many people are without access to something we have become accustomed to over the last few generations: ready warmth. We can no longer rely on wood, oil, coal and gas to stave off winter cold, but must seek alternatives and soon. Complacency has just come face-to-face with reality.