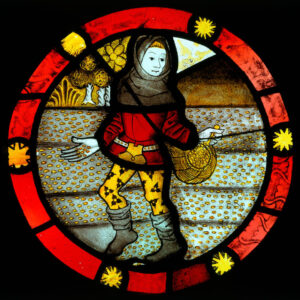 The sun has made a welcome appearence and beckons to me. Plants are similarly beguiled and the first signs of spring are there in the green shoots beneath overhanging hedges. It’s that time of year when an unexpected frost can nip tender plants. As a result, I’ve been out and about protecting the most susceptible. Those that don’t need the shelter of the greenhouse – such as pelargoniums and over-wintered physalis – might still fall foul if we have a really sharp spell of cold weather.

The semi-hardy plants fall into three main categories: those that hate having soggy bottoms (and who doesn’t?) and crowns, those that loath dry winds and frost, and those that despise both. Open-structured stems especially fall prey to sub-zero temperatures, the moisture freezing and expanding until the stems are reduced to a brown, rotting mass. 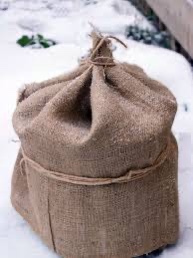 In areas of the UK where a prologned frost can be expected most winters, it is traditional to lift softies like dahlias, but here is the balmy South West we can push our luck and leave the tubers in the ground. I’ve tried both ways, but prefer to leave the tubers undisturbed if I can. The east border is pretty much sheltered from the worst weather and what the walls can’t provide in terms of shelter, Salvia Hot Lips does the rest. On the south side of the house, though, the short border gets blasted by wind and rain straight off the sea. Here the dahlias need more than Salvia Amistad offers and I provide them with a thick coat of Strulch or other mulching material to protect them from the twin monsters of wet and cold. This seems to do the trick. I say that in the hope that we are not faced with another Beast From The East (although snow is a surprisingly good insulator). 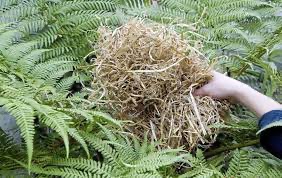 I can’t mulch our tree ferns (Dicksonia antartica), but Eric and Ericson (see what I did there?) are on a raised terrace area and exposed to drying winds. They have been with us for decades and  I used to cosset them with swathes of old towels covered with black bin liners until temperatures rose to a more acceptable 15 C. However, this made them more prone to rot in their lovely knobbly crowns, so an alternative method had to be employed. This proved to be an age-old method of using sacking stuffed with straw, allowing the wooly crowns to breath while providing an insulating layer. 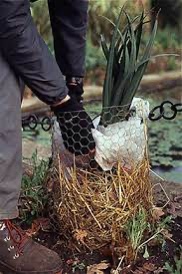 It’s a method used extensively throughout the medieval period and is still used today. Now a cage of chicken wire restrains the straw over which sacking covers all. In the more distant past, open woven structures of willow or hazel might form a cone slipped over a frost-tender plant and this filled with straw. Vases or planters, too large to be moved from the open garden, could be wrapped in sacking to prevent frost shattering the fragile clay and to protect the contents.  Smaller pots were often placed against a wall to gain the double benefit of shelter from icy winds and the release of stored warmth from the sun. If snow  threatened, staves – bound together to make a crude trellis – could be propped at an angle like a lean-to and covered with sacking or sheaves of rushes as a make-shift roof. 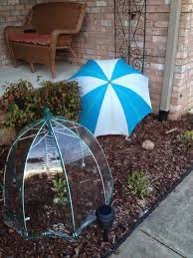 Even now – when plastic umbrellas sprout over arid-loving plants in Abbotsbury Subtropical Gardens like glossy mushrooms  – the tried and tested methods prevail. Increasingly, I forego the use of plastics in favour of straw, the latter lending greater insulation than chilly plastic and the dubious benefits of horticultural fleece.  As long as enough air can circulate around the crowns or necks, there is little risk of rot. And, if laid as a mulch, straw will protect the roots and keep the soil relatively  warm. Come spring, worms will have integrated some of the material into the soil and the rest can be added to the compost heap. Both will add valuable nutrients to be taken up by new growth. Yet it is only by mid summer that I will discover whether my risky strategy has paid off when the dahlias begin to bloom.